Sometimes the best safe isn’t the most secure safe. Instead, the safest is the one that no one knows about. If you are interested in ways to hide your safe from prying eyes, we are recommending a few types that can excel at being incognito. The first safe we’re going to be talking about is a wall safe.

A wall safe is a great way to hide a safe because you can secure them in the wall right behind a picture or piece of art so that no one knows the safe is there. It’s really ideal if you have a small set of valuables that you want to hide.

The disadvantage of wall safees primarily is that they don’t have a lot of space in them because they’re meant to go into a wall that’s only four inches deep. You end up only having about two and a half inches of active space inside of a wall safe. So you can’t put a lot of possessions inside of them as they’re going to be a target for people who can open a locked safe without a combination.

The other issue with most wall safes is they’re not fireproof because they’re built with such limited space. They can’t have the extra bulk required to make them fireproof. But if you’re trying to conceal something from somebody that’s breaking into the house and you don’t want them to know, as safe as they’re wall safes are one of the best ways to do it.

If you are building a house, there are wall safes that you can purchase with fire ratings, but they’re much, much deeper. So you’re actually going to have to design the wall or space that you’re putting it in ahead of time. But wall safes are a great option for a concealed safe now with a little forethought.

Another good option for a concealed safe is an in ground safe. The safe actually doesn’t sit on the ground. It goes into the concrete and the concrete comes up to the lip here so that you can lay a carpet or something over it. So no one knows that the safe is in the foundation. They have a lid that pops off like this and then your door is here. Now, these doors are normally spring or actuator loaded so that it’ll help you lift that weight up. And these come in a variety of sizes.

The biggest fault with an in ground safe is that most new homes are constructed with post tensioned slab and you can’t put a safe into the concrete that is potential because you’ll ruin the structural integrity of those tension cables. And if you hit one, it could be a disaster. So if you have a really, really old house that doesn’t have a potential slab, you can put these in. Otherwise, you need to plan your development and plan your build with the floor safe in mind so that before they pour the foundation you can get these safes in.

One of the best thing about floor safes is that they are typically burglary rated. Some of them have a half inch solid steel door. So you get a lot of security with a floor safe than with a wall safe because they’re going into such a tight space. They don’t have a very thick door or a very protective layer. They’re relying on the fact that it’s hidden within ground floor saves.

You get the hidden feature, as well as the security feature of the safe. The major weakness of floor safes, though, is that they are not watertight. So in the event of a fire, somebody comes in and starts spraying water everywhere. Water will get into the safe.

They do inherently have some fire protection because they are below the ground, in the concrete and in the ground. So they are fire protected to some extent, even though they don’t have official fire ratings. But water will definitely get in. And so you want to make sure that you have a way to ensure the water integrity of any content that you’re putting into the safe.

The last thing I want to talk about isn’t a way to hide a safe from somebody that’s already gained access to the home.

But what we get when we finding the best safe is that with larger gun saves, a lot of people are putting them out into the garage and the garage door is open and somebody is driving along the street. They can see that there’s a safe in there. So American security came out with a great product called the Safe Cloak. Now it’s designed by American security for American security safes. But what you’ll find is that most gun safes come in standard sizes so that you can use this product on gun safes from other manufacturers and other brands.

Now, what’s really cool about this product is it essentially just lies over the face of the gun safe and makes the gun safe look like a cabinet. Now, if you’re in the garage, you’ll see it’s not a cabinet because the sides are exposed.

But if somebody is driving by on the street and looks into your garage when the garage door is open, it actually creates a very good illusion that it is a cabinet and not a gun safe.

So those are three things you can do to hide your safes. If you are planning to buy a safe and need more in-depth info and recommendations, The Safe Company is always available to help you out. We are just one click away.

Drop By Our Showroom 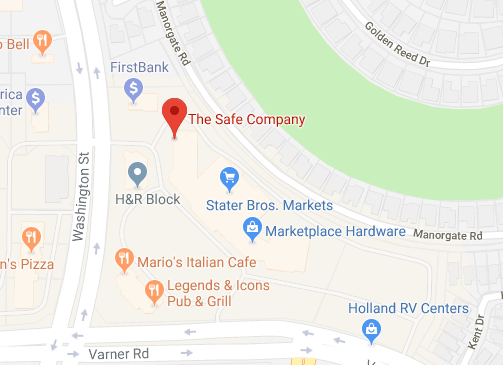